The National Gymnasium and Annex 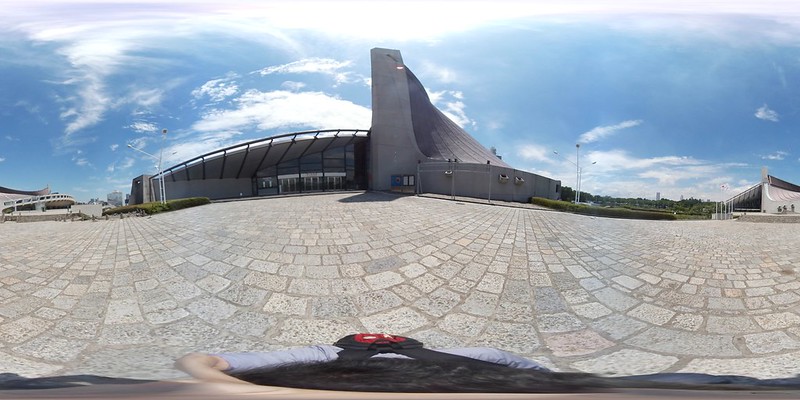 The National Gymnasium was the venue for the swimming and diving events during the 1964 Games while basketball was held in the adjacent National Gymnasium Annex. Shortly after the end of the war, the Japanese government built housing for American forces and their dependents in a community which came to be known as Washington Heights. By early 1962 the Japanese government requested the return of the land that made up Washington Heights for use as the Olympic Village. In return, the Japanese government offered new land in Yokata. U.S. authorities agreed to the plan, relocating to Yokata. The Tokyo government leveled much of Washington Heights, using the land to start construction of the National Gynmasium in 1960. The remaining homes were used as the Olympic village. After the Olympics, the Olympic village was demolished, leaving only a single home standing as a memorial to the 1964 Games. Much of the area was transformed into modern day Yoyogi Park, while other sections were sold and turned into housing and high rise buildings. As with other Tokyo 1964 Olympic venues, the National Gymnasium has continued to operate successfully, hosting sporting and cultural events to the current day. The proximity of the venue to Yoyogi Park and the shopping mecca of Shinjuku has further kept the Gynmansium as a popular location for events. In popular culture the National Gymnasium remains a fixture of Tokyo, recently appearing in the 2015 anime film Sword Art Online: Ordinal Scale.

The National Gymnasium was built on the grounds of Washington Heights, a former American military dependent housing base. Some of the homes were retained for the nearby Olympic village, whlie the infrastructure such as the theater and school, were demolished. The National Gymnasium remains in use. Due to its proximity to the main broadcasting headquarters of the NHK 日本放送協会 Nippon Hōsō Kyōkai, otherwise known as the Japan Broadcasting Company) the National Gymnaium is often featured at the end of live telecasts. The Gymnasium lies next to Meiji Shrine and Yoyogi Park, which have added to its prominence. As a recognizable landmark the Gymnasium has been frequently featured in Japanese media. In 2016 it was the site of a battle sequence in the anime film Sword Art Online: Ordinal Scale.

Prior to the end of World War II, the National Gymnasium was an Japanese army parade ground and not considered to be used to be a part of the 1940 Olympics. After the war the land was turned over for use by the occupying forces of the United States military. Dependent housing was constructed and the new base was called Washington Heights, essentially a small American town in the center of Tokyo. The Washington Heights complex added to the mixing of music and culture in the Harajuku area as shops opened to cater to the American service personnel. As American families returned to the United States, they often sold belongings in Harajuku, leading to the area's development as a fashion mecca as young Japanese frequented the secondhand shops for American fashions. Looking north towards the National Gymnasium and Annex. The wooded area to the west is the grounds of Meiji Shrine. Towards the top of the photo is modern day Harajuku. The Washington Heights/Olympic Village housing to the west and south have been removed. Yoyogi Park occupies the area to the west. Commercial buildings and housing are now to the south. Traces of the Olympics remain on the pedestrian walkway next to Yoyogi Park leading to the National Gymnasium. Reliefs depict olympic events, while a globe and bronze plaque with TOKYO 1964 mark the ends of the bridge. 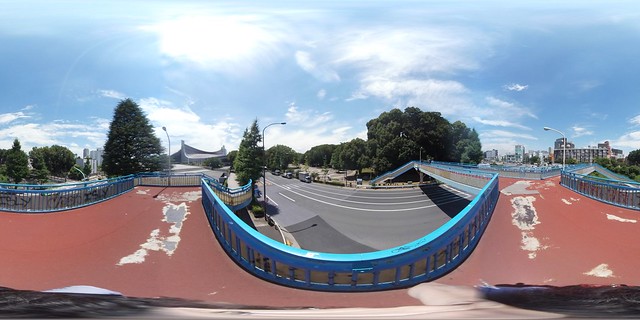 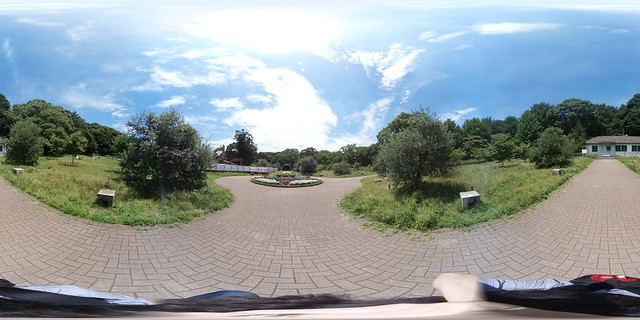